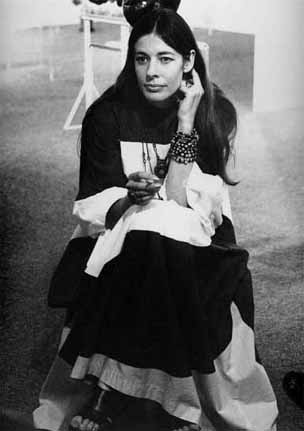 Caroline wearing a Marimekko dress, in attendance at the Gallery 21 stand, ART 5'74 BASEL.

This photo was taken by Ruth Vögtlin, Zurich, and was displayed at the Art 6'75 on a press board covering previous fairs and its existence was only discovered then! In the background one can see part of a mosaic by Armando BALDINELLI and a sculpture by Zoltan BORBEREKI. 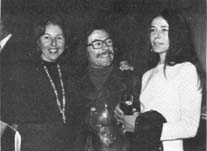 Caroline with Natalie Knight and Armando Baldinelli at a cocktail party held in the Carlton Hotel, Johannesburg, in 1974.

The occasion was the presentation of the maquettes submitted by 6 artists for a sculpture competition won by Zoltan Borbereki, adjudicated by James Fitzsimmons, Editor of Art International, Switzerland, and Prof. Fabio Barraclough.

This image was published in "Communicat", Johannesburg, September 1974, p. 67 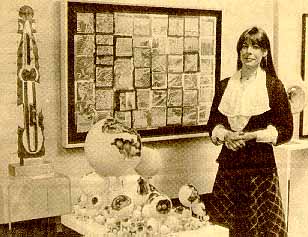 Caroline amongst exhibits for "The Nude at 21" exhibition which opened at Gallery 21 Fox Street Johannesburg on 7th June, 1983

(click on image to return to the Johannesburg art scene)